If the problem for Democrats isn’t the policies, it must be the other stuff — the trust, the emotional connection, the identity. In short, the political brand.

And judging by some of the contradictory results buried in Democrats’ mid-term thumping, it is very much not the policies. 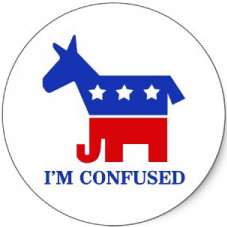 It’s annoying. We’d like to think we and our fellow voters make up our minds based on cold, hard facts. But just as consumers will list the functional benefits of a product while really basing their purchase decision on less rational considerations, so voters have been shown to “invoke their own issue positions to assume candidates they like agree with them.”

Annoying or not, using brand management techniques would empower Democrats to reap the benefits of the good policies they support.

Adopting new brand-based analytical models for campaigns would be a big deal. It would likely mean a wholesale culture change that would have to permeate Democratic operations at every level, from day-to-day campaign tactics to big-picture management strategies for campaigns and officeholders.

But Democrats can’t afford to run another race without more branding savvy.* This election has been projected to cost over $1 billion, and with huge ideological differences between the parties, there’s too much at stake not to get the most out of the exhaustively researched and fully realized set of techniques and frames found in commercial brand management.

Here’s how Democrats can start using these powerful tools in real races.

If you think voters’ decision-making process is obnoxious, you should see some of the worst fundraising emails Democrats sent in the last cycle. Then again, chances are you did — a lot of people even claimed to receive obnoxious Democratic emails from lists they didn’t sign up for.

Many of the most annoying tactics, like bill collector-style “last chance” warnings and august leaders of our great republic “begging” for contributions, became prevalent because they “tested” well. In other words, practitioners would pit one kind of message against another and see which raised more. And that kind of A-B testing worked, to an extent: questionable emails helped raise about a kajillion dollars this cycle.

But that kind of one-time test is by definition short-sighted. If you only test for what works best today, pretty soon tactics become de facto strategy and you lose sight of tomorrow, risking longer-term damage to your reputation with voters — damage like the “epic turnout collapse” that may have just cost Democrats several House seats.

As I like to say, picture the New York Times website testing one of their typically staid headlines against a New York Post-style bawdy sex pun headline. The sex pun would almost certainly get more clicks every time. But then before long, you’re not the Gray Lady anymore. Now you’re just a tabloid.

At my firm, Trilogy Interactive, we wondered if we could improve performance by strengthening political brand associations in the minds of supporters instead of risking negative changes to the meaning of the brand. We worked with Facebook and our client, Michelle Nunn, to run a test showing that simply hitting recipients of fundraising emails with simultaneous fundraising ads on Facebook increased donations — by 60%:

And here’s the thing that makes this a truly exciting finding for branding: the increase wasn’t driven primarily by clicks on the ads. It was mostly driven by transactions that came through the email program — and those contributions were made by some of the least engaged viewers of the ads (as measured by clicks):


That means what these ads were essentially doing was boosting the candidate’s political brand recognition and mindshare among existing supporters. And ultimately it means that Democrats can improve their campaign performance by strengthening their brands instead of damaging them.

Henry Ford is sometimes supposed to have said, “If I had asked people what they wanted, they would have said faster horses.” While that quote appears to be apocryphal, it is true that in politics, people do often have a hard time making honest self assessments of their priorities, and it’s equally true that politicians have an immense ability to lead the polls rather than following them.

Democratic pollsters, TV consultants, campaign managers, chiefs of staff, candidates, officeholders, and other assorted power brokers need to get comfortable with that. Just because polls tell you the national party is unpopular in your state doesn’t mean ignoring your party will help, as Mark Pryor effectively did in Arkansas. And just because turning out unmarried women will be crucial to your election in Colorado doesn’t mean it was smart of Mark Udall to become such a one-note candidate on reproductive freedom that people started calling him “Mark Uterus.”

But while barking at people to be better leaders is always good clean fun, the tools and methods developed in the branding world offer a more practical way forward. For example, David Aaker’s brand “benefit” types could easily be adapted, helping political campaigners better identify parts of their appeal they may be sacrificing and compensate.

While any airline gets you from A to B, for example, United Airlines doesn’t just tell customers they fly to Chicago. United invites you to “fly the friendly skies,” which is aspirational and approachable and makes it sound like you belong; the slogan has been successful because it’s a statement about the other, non-“functional” benefits the brand offers.

A lot of Democratic campaigns, especially in red states, chose to focus almost exclusively on the functional benefits of their political brands in 2014, in part by localizing their races — talking about the nuts and bolts issues that affect in-state voters and distancing themselves from the national brand. At one point, a group of Democratic candidates even asked President Obama to delay a big executive action on immigration in order to keep the national brand in the background.

That immigration move may have cost Democrats more than they realized. Let’s look at some of the other categories of brand benefits Aaker has identified.

Aaker: “Emotional benefits add richness and depth to the brand and the experience of owning and using the brand. Without the memories that Sun-Maid Raisins evoke, the brand would border on commodity status. The familiar red package links many users to happy days of helping Mom in the kitchen (or the idealized childhood for some who wished that they had such experiences).”

Emotional benefits can also be hugely powerful in politics. Channeling anger at opponents drives turnout, anxiety drives people to make more factually based voting decisions, and everyone knows about hope from Barack Obama’s 2008 campaign — one of the biggest emotional benefits any campaign has ever provided. Not every campaign has to be that historic, but no campaign should rely too heavily on local issues at the cost of providing a valuable emotional connection.

“For example, consider the difference between using Olay, which has been shown to heighten one’s self-concept of being gentle, sophisticated, mature, exotic, mysterious and down-to-earth, and Jergens or Vaseline Intensive Care Lotion, neither of which provides a comparable self-expression benefit but similar functional benefits.”

One thing I’ve seen as an experienced digital fundraiser is that grassroots donors are often motivated to give not by the mundane needs of financing a campaign but rather as a simple expression of a certain point of view — specifically a point of view insufficiently represented in mainstream political dialog.

A great example from recent progressive history is the rise of MoveOn.org, which accomplished its most headline-grabbing growth by helping progressives express their opposition to the invasion of Iraq. Speaking as a progressive myself, many of us felt frustrated that our position wasn’t well represented on talk shows and in newspapers and so forth, let alone by elected leaders. Donations were a way to vent that frustration in a way national political actors were recognizing.

If you’re focusing your campaign on how much you get done for your state — to the point that potential donors and voters don’t feel supporting you helps them express anything — then your political brand is failing to deliver a vital benefit that would make you more valuable to your audience.

Aaker: “A brand can enable a person to be part of a social group and thereby convey social benefits. ‘When I use or buy this brand, the type of people I relate to are _______.’ A social benefit is powerful because it provides a sense of identity and belonging — very basic human drives. Most people need to have a social niche, whether it is a family, a work team, a recreation group, etc. This social point of reference can play a role in defining a person and influencing what brands he or she buys, uses, and values.”

In many ways, political parties are the ne plus ultra of reference points for individual standing in a democratic society. They help forge ties among strangers and give broader social purpose to votes for individual candidates.

It’s one thing to run away from your national party, but you have to replace the esprit de corps that parties offer with other social benefits. “When I vote for candidate X, the type of people I relate to are _______.” Without compensating for this loss of identity and belonging, many red state Democrats’ political brands offered fewer benefits than their opponents’. That made it hard to drive the turnout they needed to win.

Immigration action alone might not have turned around Democrats’ broad and deep losses. But when President Obama went through with his action after the election, it very likely delivered strong emotional benefits of relief and gratitude to many voters in immigrant communities, felt to many others like an expression of compassion, and gave many others a positive social reference point tied to Democrats.

The result: the president’s low approval rating — the same rating that had been largely responsible for these candidates running away from the national party brand in the first place — rebounded. What was a 43-51 deficit in Gallup’s November 4 poll turned into a 48-48 tie by New Years Eve. Granted, that turnaround probably also had a lot to do with improving jobs numbers and the fact that Republicans were no longer airing ads attacking him. But that’s the point — it’s all part of the bigger brand picture.

Adopting best practices from commercial brand strategy won’t be foolproof, but it is a very powerful tool to help campaigners, legislators, and others develop better overall strategies, in the day-to-day as well as the long-term.

From improving email fundraising safely instead of recklessly to better calibrating the benefits campaigns offer voters, Democrats have shown they can’t afford to ignore political brand management any longer.

* Note: This is different than the structural challenges facing the long-term health of the Republican brand, recent victories notwithstanding.