The 2016 campaign is barely under way, and this week Hillary for America unveiled its branded smear-fighting/fact-checking program, The Briefing:

As the content lead for the 2008 Obama campaign’s Fight the Smears microsite and Obama Action Wire email program, I’ve reviewed similar branded fact-army efforts like Mythopedia and the Factivists before. But I didn’t write the book on debunking — John Cook and Stephan Lewandowsky did. Specifically, they wrote the Debunking Handbook, which comes with a really nifty summary of why shoving facts down people’s throats doesn’t work:

A common misconception about myths is the notion that removing its (sic) influence is as simple as packing more information into people’s heads…in science communication, it’s known as the “information deficit model.” But that model is wrong: people don’t process information as simply as a hard drive downloading data. 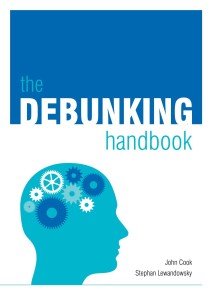 Instead, people apply all sorts of emotional, social, and ideological filters to the information they encounter. That means many well intentioned fact checking efforts often backfire. The authors of the handbook identify three typical ways that can happen:

Of those, the Clinton effort should be primarily worried about #1 and #2, since the Briefing seems to focus on communicating with existing supporters; #3 is more about convincing those who are inclined to disbelieve anything you say, a subject I’ve also written about that comes with its own challenges.

As they say in the handbook, “[F]amiliarity increases the chances of accepting information as true.” That means the typical information deficit approach of identifying a myth and subsequently providing evidence to refute it is clearly counter productive. You end up increasing people’s familiarity with the myth when you want them to get more familiar with the facts! 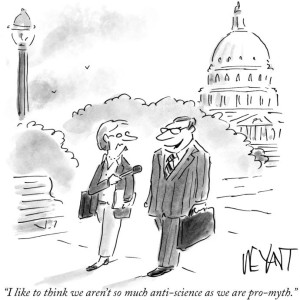 So how does The Briefing effort do at avoiding this effect? Actually, pretty well.

The video is framed as an effort to get the facts out in the face of lies. That kind of general warning is a key factor the handbook’s authors cite. Brian Fallon, the host of the video, does then introduce the lie, but he quickly refutes it with more than facts.

Another key to replacing the wrong facts with the right ones: he provides substitute narratives to fill in the gaps left by the departure of the old information, such as which cabinet department really approved the mining company sale and which rhetorical devices the attacker is using to mislead. He even helps people wrap up the correction in their minds by closing with specific advice about how the viewer can help (by sharing the video and signing up).

All in all, kudos to the Clinton team here.

Unfortunately, The Briefing doesn’t do as well avoiding the overkill trap, the simplicity of which belies its importance. The handbook authors stress how important it is to make your debunking content easy to process (my emphasis):

That means easy to read, easy to understand and succinct. Information that is easy to process is more likely to be accepted as true…

The Overkill Backfire Effect occurs because processing many arguments takes more effort than just considering a few. A simple myth is more cognitively attractive than an over-complicated correction.

Putting the information in a video was a great start for the Briefing — visual media can make information much easier to process for some people. But the video almost certainly would have been more effective if it had been shorter.

By the time Fallon gets to the information on Bill Clinton’s speeches, the video starts feeling unfocused and overwhelming. That Bill part isn’t just unnecessary; it will probably keep some people from fully absorbing the necessary parts about Hillary.

The lesson: when it comes to fact checking, less can definitely be more.

The psychology of facts can outweigh the facts themselves

As Fallon says in the video, “Facts matter, and you deserve to know them.” Both of those points are true, but when it comes to fact checking, the fact “branding” can be almost as important as the fact content. The truth, after all, is a powerful and compelling brand.

But ultimately the truth is a functional brand benefit, and functional benefits have limited power.

Forfty percent of people know that the power of truth is what you make of it.

Functional benefits are what a brand’s offering actually does. The horsepower in a certain truck, for example, or the economic policy of a political candidate. They’re what people generally prefer to think of themselves using to make up their minds about what to buy or how to vote.

In our truck example, a typical buyer would normally rationalize his purchase by telling himself he needs all that horsepower to tow boats and jet skis around. But it’s not really the functional benefit that sells him. Instead, what really sways the decision is the identity benefit of seeing himself as a tough guy, the emotional benefit of feeling powerful, and so forth.

The Briefing’s ability to engage supporters on the deeper identity, emotional, and social levels is likely to do more than the facts themselves to encourage sharing and participation. Will supporters feel empowered? Will sharing the video help them feel like they relate more to Hillary Clinton? Will they self identify as good citizens, committed to the truth?

If the Clinton campaign can combine good answers to those questions with a simplified approach — and build on the good work they’re already doing — the Briefing should be able to do a lot of good for the campaign.