Republican floundering on immigration reform is a textbook illustration of why accountability and authority are so important to managing brands.

In my estimation of how political brands are made, I claimed that when it comes to parties, “Short of [electing one of its members as the nation’s president], no one stakeholder has the gravitas to embody the party and thus the authority to shut down enough of the others to maintain discipline.”

And “shutting down enough of the others to maintain discipline” is precisely what every Republican in the country with an opinion on immigration reform is trying to do:

We laugh at GOP efforts at “rebranding”, and it was certainly funny how teabaggers put the kibosh on them. Yet they’ve been unable to effectively kill immigration reform, so it festers within the GOP caucus: the realist reformers on one side, and the ideologue reactionaries on the other. And neither side has the heft or political juice to impose its will on the other. They are effectively paralyzed into inaction.

Picture this: some important people from your company’s strategy department decide that the firm needs to produce a special new widget for the growing Asian and Latino populations in the U.S. The marketing department starts promoting the new widget, and everything’s going great — except the production department simply refuses to supply it. The strategy department knows this widget is too important to let the production department kill it, but Strategy doesn’t have the authority to make Production actually do it. In the meantime, Marketing keeps churning away to try to force Production’s hand.

The Republican tug-of-war for branding control isn’t nearly
as cute as this barnyard version.

That’s what’s happening for Republicans. Elite Republicans in Washington know the party needs to support immigration reform because of demographic changes, so they talk it up in the hope that talk turns into policy. But rank and file Republicans in the House aren’t producing.

This is a nightmare scenario for any company. Without buy-in from your fellow stakeholders, you end up with a half measure that’s worse than doing nothing:

It’s a curious state of affairs. Republicans have two options: 1) kill the bill, and quickly, or 2) pass the bill, and quickly. Either approach will deliver political pain, so like a bandaid, its best to rip that thing off as quickly as possible, then hope that people’s attention spans get pulled to the next shiny object (and odds are, they will). Instead, we have this limbo situation delivering the worst of all worlds. Every day this battle drags on, the Republican coalition frays a little more from within, Spanish-language media bashes the crap out of Republicans for their hostility and inaction, and Republicans look incompetent and unable to govern to the broader public.

It’s like if Rice-a-Roni changed their tagline from “the San Francisco treat” to “the Miami treat.” Probably not a great idea, but the only worse idea would be using both and confusing everybody. 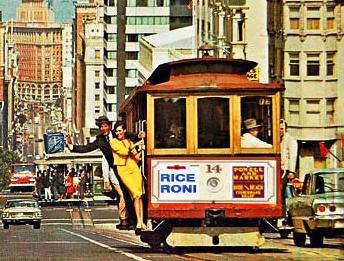 It was amazingly hard to find a video clip of the Rice-a-Roni
bit from There’s Something About Mary.

Theoretically, the Republican-majority U.S. House will soon vote on some sort of immigration legislation, which will either pass or fail — and either way, it will be better for Republican branding efforts than the current tug-of-war. But the longer they wait, the deeper they dig the hole for their party’s brand.